We’ve been seeing a lot of time spreads trading lately. A LOT. And one variety of time spread I’d always been a fan of—directional time spreads—I’ve become just stark raving mad of a fanatic about recently.

If you’re not familiar with directional time spreads, they are basically exactly what you would think: time spreads that make money if the stock moves in a particular direction. This is as opposed to the more classic direction-neutral time spreads, which profit from a stock trading in a range. Let’s take a look at how this works.

How to Trade Directional Time Spreads

A time spread is when a trader buys one call and then sells another call with less time until expiration but with the same strike. We could also construct the time spread the same way, using both puts. With any time spread, the ideal place and time for the stock to be is at the shared strike price, at the expiration of the short option. Let’s examine that risk-reward.

In the case of call time spreads, if the stock falls so far that both calls become worthless, the trade is a loss equal to what the trader paid for the time spread. If it goes up a lot and both calls are trading for parity (the in-the-money amount), the two options would have the same price, meaning the spread is worthless and the loss is, again, what the trader paid for the spread. In that case, the short option would get assigned at expiration, and the trader would probably exercise the long call to avoid taking on the short stock position.

The shared strike is the sweet spot. It’s the most the long call can be worth with the short call expiring worthless (and not getting assigned).

Being an option trader, I’m what you might call “a numbers guy.” Give me a bunch of numbers to look at and I’m happy—especially with the option Greeks (and if you’re not that familiar with the option Greeks, or want to get to know them better here’s a class going on this month on the Greeks you should look at). That’s what I wrote my first book on. I use them. But in the case of directional time spreads, I love having the accompanying profit and loss diagram to help tell the Greeks story even better. Take a look at this example.

Splunk Inc., symbol SPLK, is a wily stock. It, like many lately, fell below its 1-year support and rebounded a bit. Let’s imagine we expect SPLK to rise from its price (at the time I am writing this) of $79.53 up to $90 over the next week (a hypothetical example but not unreasonable in a stock like that one).

We could buy calls, like the October 14th 85 calls, which are around 1.05. But the problem is, if the stock doesn’t make it over the breakeven of $86.50, the trade loses 100%. That’s why the directional time spread can be so much better.

If we’d instead buy the October 14th – October 21st 90 call time spread, we’d have a profitability that looks like the blue line in this graphic. 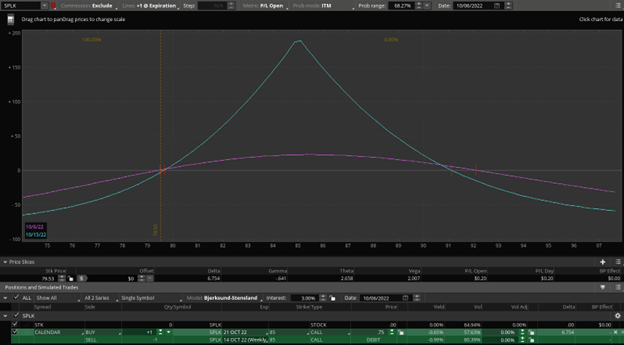 Modeling just a 1-lot spread for reference, the spread cost (and therefore max risk) is 75 cents a contract—so 75 bucks. If the best-case scenario happens, the max profit could be about 1.93—so $193—which is about 250%. We don’t expect the trade to be right at that sweet spot that is the strike price. But just in a range maybe between $83 and $88.50 or so, which would still yield above a 75% profit over the week life of this trade.

But the real magic is that thin dotted line. That’s the current stock price. It’s sitting right about at the breakeven of the spread. Key point here. That means, unlike the long call that would lose 100% if the stock doesn’t move, this spread loses basically nothing.

This trade is all delta and theta. Delta you can see pretty readily. It the stock price is higher (to the right of the yellow dotted line), the trade makes money. That is, up to the upper breakeven which is around $91. That’s the trade off with directional time spreads—if you ever shoot your target massively, you can lose.

Theta shows up as the difference between that blue line (again, the at-expiration price of the spread) vs. the purple line, which is the spread value on today’s days. If the move happens today, the spread makes money, but not a lot. Time needs to pass to really maximize the value of directional time spreads. That’s why we always set a price target along with the time target.

I hope that helps!

I’ve been watching your posts for quite a while now, and perhaps it’s my computer, but when you post your charts, I can barely make out what’s on them. I can see overall shapes of the lines, but even the color of the lines is muddy. And forget reading actual numbers on the charts! (I can’t magnify the charts either.) Your posts do no good if people aren’t able to assess their content. So do I need to go to the eye doctor, or are other people having this same issue as well.

Hey Kathy. There is a little square-type looking thing at the bottom right corner of the video. Click that and it makes it full screen. I don’t have great eyesight (either?). And when I did that just now, it was legible. Give it a shot. And thanks for watching! Keep up the good work!

Hey Dan. How’s it going?
Did a good trade buying a put on AMD on Friday morning for the next
Friday expiration. Sometimes you read a blurb and check it out and give it a shot. Looks like chip manufacturing is expecting a rough year.
Is there a way to blow up your chart? I cannot see the numbers for price and dates and I’m still not confident on the “directional time spread”. Are these also called a “Calendar Spread”? Sometimes it drives me crazy when someone calls the same setup something different. Usually some lamo trying to sell you something you think he has no idea what they are talking about.
I hope things slow down around here soon. Been so busy I keep getting further behind on my trading skills and research. I think I have missed your last 3 webinars. I had a fairly good earnings season and would have been better if I had been more informed and researched better. Lots of times it’s hard for me to get my trades on and listen to John at the same time. As I get older my multi-tasking skills have suffered. Seem to have lost a step. Alright, enough of my bitching. See you around. Always good to talk to you. Take care.
Russell

Hey Russell! Yep. Calendar Spread = Time Spread. Total synonyms. I have always used them interchangeably. Not being fancy. I just use whichever hits my mind first. And either can be directional. The idea is you want the stock to be at the shared strike price at expiration. Thus if the strike price is different than the stock price it’s directional to some degree. And KEEP AT IT. Believe me. I know life gets busy. But squeeze in what you can when you can and keep up the positive energy. Talk soon, my friend!