We saw a pivotal Fed Announcement this week. It may be the end of the 75-basis-point parade that’s been waltzing down Wall Street for a good part of this year. We’re now starting to see varying thoughts of what the Fed will do next, and not just from outlier accounts on Twitter, but from trusted thought leaders. The CME Fed Funds contract is pricing in almost a 50-50 chance of a 50-basis point hike and a 50-50 chance of a 75-basis point hike. What’s next? Data will be the key drivers. But what data?

With earnings season winding down and that resulting visibility on the economy available (and priced into stocks) there are only a few real data points that will go into the Fed’s process in making the next rate decision (on Dec. 14). Here are some dates to keep on the radar:

We watch unemployment because it’s an indicator of inflation and economic health. Wage inflation is a driver of broad inflation. Fed Chair Jerome Powell himself listed rising wages as a major concern. And if more people become unemployed, it’s a sign interest rate hikes are cooling the overheated economy and they can start putting the brakes on rate hikes.

Now comes the interesting part. The Fed says their preferred inflation indicator is the Personal Consumption Price Index (PCE). That is released in the Personal Income and Outlays report, which comes out typically around the end of each month (though the next one is Dec. 1). So, you’d think this is what the market watches and what causes trends to start, end, strengthen or reverse. But…

At the last trading firm I worked, one of the partners told me about a trading firm that would only hire engineers or musicians. Engineers I get. They stereotypically make great traders. But musicians? I’ve been a professional musician. I wouldn’t trust anyone I met in that scene to manage my money—especially if they’re a drummer (you’d have to have played in a band to get that reference).

So why might musicians actually make good traders? Pattern recognition. That’s what music is, right? Theme and variation.

So, I was looking at a chart of the S&P500 (SPY specifically) to support my original thesis of this article, which was initially to be titled, “The Trend Is Your Friend,” and I assumed we’d find pivots on the chart around unemployment and PCE. But in fact, the pivots tend to happen around CPI announcements instead.

Take a look at this chart of the SPY for the past year. 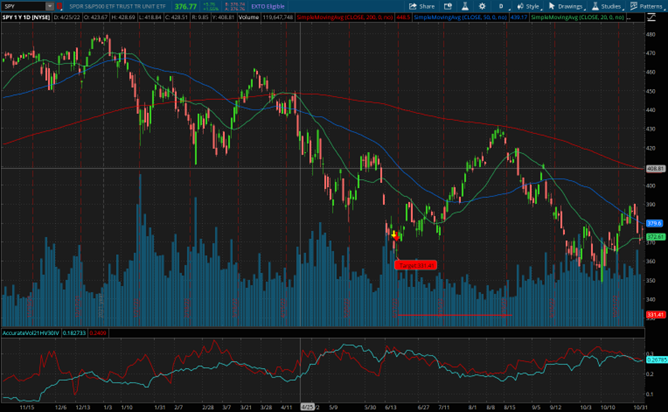 CPI (and PPI) come out mid-month. Like clockwork, that’s where we tend to see the reversals in the broad market. It’s shocking. I would not have logically come to this conclusion. But the more experience you have with trading, the more you realize the market doesn’t always do what you think is rational. The old trader idiom, “Trade what you see” found its place in our vernacular for a reason. What I see is mid-month, practically EVERY MONTH, a new trend being established.

What’s really strange here is that if indeed the market trend has changed as a result of CPI / PPI, traders and investors are dismissing the Fed’s trusted inflation gauge and using their own. Could it be the masses of retail traders are misinformed and not watching what they should be? Maybe. But if the Fed says this is what they’re using to make rate decisions, it doesn’t seem logical to use any other metric (there’s that word again, “logical”). So maybe that’s not it.

Or could it be the smart-money institutional traders have a better way of looking at it and are looking bigger picture? These questions are a great mental puzzle. But, as traders, it brings us back to the OG, time-tested wisdom of “Trade What You See.” Follow the trend. Follow the Momentum.

Now that said, we all know market patterns can and do change on a dime. (Think of another trader idiom, “It works until it doesn’t.”) So

What Should I Trade?

In my opinion, it will be a momentum traders’ market for the rest of this year. Some trends will be data driven as we see on the chart. And some will be the result of technical patterns. Indeed, we see some mini-trends on the chart between data points one can capitalize on with short-term option trades. And missing them is missing opportunity.

The best thing you can do right now as a trader is to shift your thinking to be more of a momentum trader. Momentum trading is really powerful and is classic and straightforward. It’s low risk if you manage it properly and has high reward potential. Still, there’s a knack to it and it requires some training. I plan to pull together a momentum trading webinar within the next week or so, so keep an eye out for that. Getting good at momentum trading can move the ball farther and faster for you than anything else right now.