To be a good market analyst and trader, you should make it a point to learn intricate details that are illustrated in charts. The study of charts or technical analysis is what most trading systems are built upon. Learning and problem solving are a big part of artificial intelligence (AI). The idea is to get a machine to think and react like a human. Machine-based learning is dependent on pattern recognition and repetitive responses. Think cause and effect. Early pattern recognition is integral for timing entry and exits in stocks and commodities.

One pattern that I trust to identify the onset of trend is defined as a double distribution day. I prefer using 30-minute bars to scan markets for this phenomenon. It is a short-term momentum indicator that frequently occurs in the early stages of trends. This pattern normally reveals itself around midday. It typically precedes a few days to a week of choppy trendless trade, otherwise known as a consolidation phase. During this phase, the day ranges tend to be below average and volume usually tapers off to below average levels. Furthermore, there is a tendency for daily opens and closes to be near each other, which is an indication of neutrality. On the day the position is taken, the first hour range is typically below average as well. When all these elements are evident, odds for a sharp vertical are peaking.

This SPY chart from last week shows just how this pattern takes shape. A few sessions of sideways trade prompted an alert that a breakout was about to occur. Around noon on the third day, the market accelerated higher leaving a candle with no overlap in the next 30-minute period. From there another distribution began to form. Double distributions within a day session frequently ignite an above average vertical move. This pattern does not happen often, but it seems to occur more often following three to five days of neutral price action. 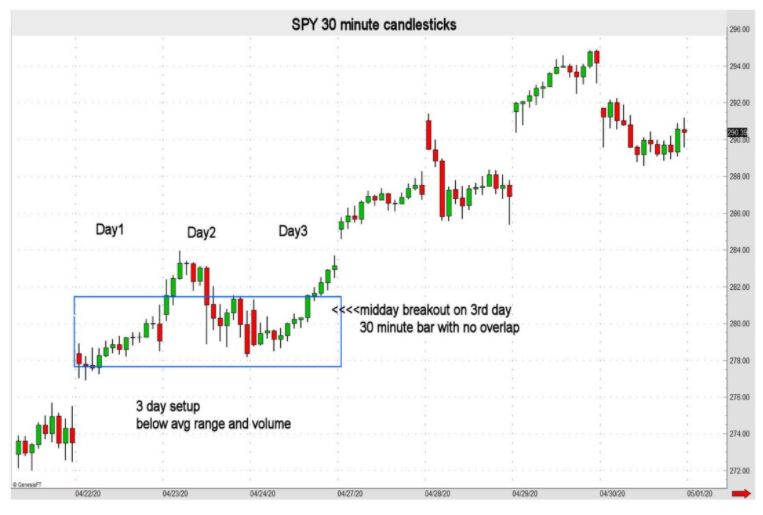