Use RSI to Navigate Uncertain Markets

Technical indicators can be quite helpful when fundamentals are absent. Now more than ever traders need to interpret price action using charts because the stock market lacks guidance. Earnings estimates and guidance mainly drive stock prices. With much of the economy shut down and the uncertainty of when it will be running at full capacity again, it is difficult to predict earnings or the possible collapse of a company or industry. The future is unclear, which makes traders anxious, and nervous traders tend to shy away from stocks and into cash or fixed income securities. Treasury and precious metal ETFs tend to do well when the future is hazy.

When fundamentals are lacking, I refer to a few technical indicators to guide my trading decisions. One of my favorites is called the Relative Strength Index, or RSI. This is classified as a momentum oscillator that measures speed and length of directional moves. It is computed as a ratio of higher closes to lower closes. More positive changes lead to a higher RSI. The scale is measured on a scale from 0 to 100. Many traders use RSI to define if a stock is overbought and has a reading over 70. On the other hand, an oversold situation arises when the RSI dips below 30. The issue I have with this method is that a market can ride that 30 or 70 line for quite some time. Thus, if you are long options it may take weeks for the market to turn in your direction. Meanwhile, time decay can seriously affect your position.

The most reliable way I have found to use Relative Strength Index is to recognize divergence. When a market rises above a previous high and the RSI does not do the same, it is considered divergent. And when a new low is realized and the RSI does reach a new low, it is also divergent. The SPY daily chart below illustrates this spectacle for an up and down move.

Trend reversals frequently occur when the there is a divergence between the RSI and price. In mid-January SPY topped out around 335, and then about a month later it made a new high around 340. Note that the RSI did not probe to a new high and a major downturn soon followed. The opposite occurred in late March when stocks bottomed out. All technical indicators have validity at some point; none works all the time. Some are meant to determine trend strength while others are designed to indicate trend exhaustion. RSI can be used for both. 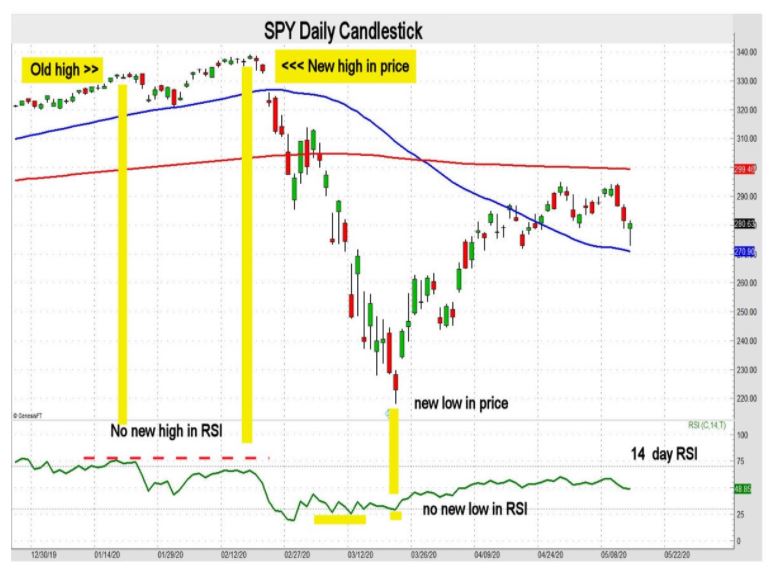