With the next round of quarterly earnings just about to start, it is a good time to take a look at trading options and in particular cash-secured puts. Option prices (implied volatility levels) tend to increase around an expected earnings report. This could be potentially good (if traded correctly) for premium sellers and not so good for potential buyers. The reason is option prices (implied volatility) tend to decrease after the earnings announcement. Again, good for sellers potentially and no good for buyers because option prices will decrease.

When option traders first discover the strategy of selling “naked” options, they sometimes get enamored with the concept especially over earnings and some might consider it to be low risk too. It really isn’t in my opinion and can be quite harmful to your trading account. Writing or selling naked options is selling options without having a position in the underlying stock or being long any options on the stock. For example, if a trader is writing naked calls, he is selling calls without owning the stock. If the trader did own the stock, the position would be considered “covered” or a covered call.

Is There Such a Thing as a Low-Risk Option Trade?

Option traders often think that it is a low-risk strategy that can offer consistent profits and indeed it can. However, selling naked options can be dangerous especially for new option traders and should be considered only by more advanced option traders and those with large trading accounts.

Short option premium can seem like an easy way to make a profit in trading. What traders forget is that the premium received from selling options is not theirs to keep until the position is closed for a profit or it expires worthless. Even though the premium may seem like a gift, it isn’t. The risks of selling options can be significant.

With the recent rise in the market and earnings season upon us, the implied volatility of many options has increased making it more tempting to do so. When implied volatility is considered high, it can be a good time to sell premium like a naked option. Generally, after the announcement, the implied volatility starts to decline as mentioned above, which is good for sellers of premium and naked option traders. That being said, it is also considered even more speculative if the position was held over the earnings announcement. A volatility event like an earnings announcement can produce some unpredictable price action for stocks. Just take a look at a few daily charts like Jumia Technologies (JMIA), Nio Inc. (NIO) and Quantumscape Corp. (QS) to name a few.

Here is an example using Netflix Inc. (NFLX). The stock was acting volatile over the past several weeks and was expected to announce earnings in about two weeks at the time of the screenshots below. It was trading around $509 at the time of this writing, and it had a potential support levels starting around the $480 level (200-day SMA) all the way down to some pivot levels at $470 as seen below. If the 470 put strike was chosen, that means the stock was trading almost $40 from the strike. But as you can see on the left of the chart in the red box, the stock had moved more than that in the past in that time frame. 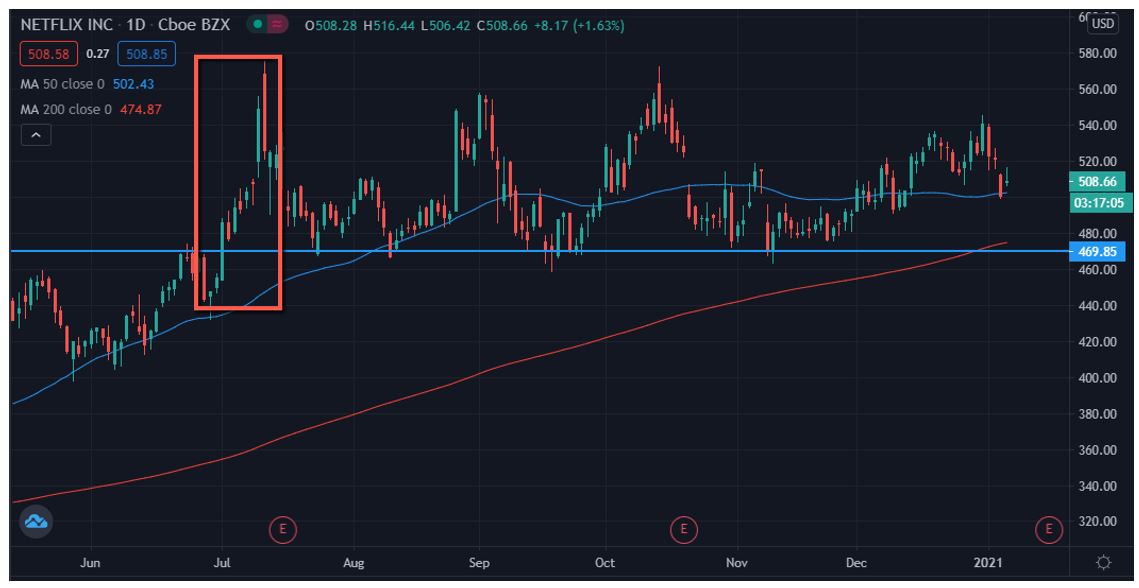 The company was also expected to announce earnings Jan. 19, which is always subject to change. An option trader could sell 10 Jan-22 (expiration after earnings) 470 puts for 6.40 each as seen below and would potentially have two support levels for the stock.

That is all well and good, but many option traders fail to limit their losses when the stock moves against them or just can’t because the stock drops so much after the announcement. Depending on the move particularly after earnings, many naked option positions can wipe out a significant part of traders’ accounts. What many traders fail or forget to realize is that each option contract usually represents 100 shares of stock. In the example above, if NFLX announced perceived horrible earnings or guidance and the stock traded down to $650 ($20 below the strike, which is possible as seen above) at expiration because of earnings, a loss of $13,600 ((10 X 2000) – 6,400) would be incurred because of the 10 contracts. An almost sure thing has now become a sizable loss.

Like many things in life, the “sure thing” is not a guarantee. This is so true for option traders and expected earnings announcements. Sometimes a positive announcement is met with a drop in the stock price and vice versa. There is a way to get an edge usually options and implied volatility, but just selling “naked” options might not be one of them or one of them for you.

For more on how earnings trading can be your most profitable trade, register here for a complimentary webinar on Jan. 13 presented by MTM founder and president Dan Passarelli.

Where to Find and How to Use Market Depth

Life in the Fast Lane