An option butterfly spread trading strategy is very versatile because it can be used in multiple ways to potentially profit and also remove or reduce risk. As usual, it is nice to have options with your option strategies. Below we will talk about how to create a butterfly spread and how time decay is a key component for potential profit. In addition, we will look at a couple of different ways to use a butterfly spread as well as a recent example.

What Is a Butterfly Spread?

A butterfly spread consists of a vertical debit spread and vertical credit spread sharing the central strike price constructed together in the same underlying with the same expiration. The long options are referred to as the wings and the short options are the body; thus, it is called a butterfly. It may be built using either puts or calls, and its directional bias derives from strike selection rather than the type of option used for construction.

For a neutral bias on the underlying, call or put options are considered. When an option trader has a directional bias, typically calls are used for a bullish bias and puts for a bearish bias. This is done generally because out-of-the-money (OTM) options have tighter bid/ask spreads than in-the-money (ITM) options. This can give an option trader an additional edge. For a (long) butterfly, maximum profit is always achieved at expiration when the underlying closes at the short strike shared by the two vertical spreads. Maximum loss for a long butterfly spread is realized if the stock is trading at or below the lowest strike (lower wing) or at or above the highest strike (higher wing). Break even at expiration is determined by adding the cost to the lowest strike and subtracting the cost from the highest strike.

Effect of Time with Butterfly Spread

The goal of the trade is to benefit from time decay as the stock moves closer to the short options strike price at expiration. The short options expire worthless or have lost significant value, and the lower strike call on a long call butterfly or higher strike put for a long put butterfly have intrinsic value. Maximum loss (cost of the spread) is achieved if the stock is trading at or below the lower (long) option strike or at or above the upper (long) option strike. Generally, time decay (theta) is fairly neutral when the butterfly is implemented and moves to positive theta as expiration approaches. Many times, it remains neutral until several days until expiration when it increases in many times a climactic fashion.

What Are the Types of Butterfly Spreads?

In my experience, most option traders use butterfly spreads for a neutral outlook on the underlying. The position is structured to profit from time decay but with the added benefit of a “margin of error” around the position depending on what strike prices are chosen. This is essentially a trade-off. The larger the spread between the wings and body, the greater the potential profit area and the greater the risk. In other words, a 40/45/50 long butterfly will have less risk but a smaller area to profit at expiration than a 35/45/55 long butterfly. Butterflies can be great market-neutral trades. However, what some traders don’t realize is that butterflies can also be great for trading directionally.

What many option traders do not know or may not consider is that butterfly spreads can be used directionally by moving the body (short options) of the butterfly out-of-the-money (OTM) and using slightly wider strike prices for the wings (long options). This lets the trader make a directional forecast on the stock with a fairly large profit zone depending on the width of the wings.

This can work out well if the underlying is expected to remain close to the short options (body) of the butterfly after the conversion. For example, say an option trader owns a 60 call (that is currently profitable) and the stock has moved up to $70 where there is some potential resistance. He or she can sell 2 of the 70 calls and an additional long 80 call with the same expiration constructing a butterfly. Sometimes, even a credit can be established with the construction of the butterfly spread effectively eliminating any risk.

Let’s say you were looking at the chart below and noticed the stock had been trading in a channel with potential support around $69 and potential resistance around $75.

An option trader thinks the stock will continue to trade in the channel even longer. A long call butterfly spread is constructed with just over a week to go until expiration (Mar-05). A 69 strike call is bought, two 72 strike calls are sold and an additional 75 strike is purchased, all with Mar-05 expiration. After middling the market, the spread is purchased for 0.65 (or $65 in real terms) as seen below.

The maximum profit is 2.35 (3 – 0.65) by subtracting the cost from the difference in the strikes from the body to one of the wings. Maximum loss is the cost. This would be realized if the stock were trading at $69 or lower or $75 or higher at expiration. The breakevens are calculated by adding the cost to the lowest strike and subtracting the cost from the highest strike. In the example, the breakevens would be $69.65 (69 + 0.65) and $74.35 (75 – 0.65) at expiration. If the stock closes anywhere between those levels at expiration, a profit would be realized. Of course, the position can and usually should be exited before expiration. Below is what the P&L diagram would look like at expiration. 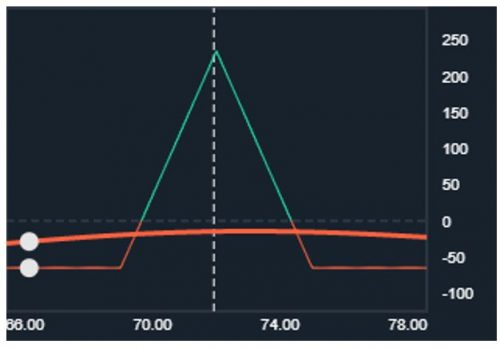 As I often think, it is great to have options on your options. With butterfly spreads, that is true for so many different scenarios as well. Adding these spreads to your arsenal as an option trader should give you another weapon for extracting money from the markets and an additional edge you may have not realized.

Selling Naked Calls and Puts – All You Need to Know

Market Sensitivity and Commodity Chains – How to Check

Why Market Analysis Is Critical When Option Trading