If you know a little about me when it comes to option trading, you know my adoration for time spreads and in particular calendar spreads. I look for them often in MTM’s daily group coaching class and of course for my own personal trading too. What I like about them is that they give an option trader positive theta to offset some delta risk up to a point. But as with most trades, they usually require patience too, which is often a good thing.

A little less than two weeks ago in class, we took a look at a neutral trade on Netflix Inc. (NFLX), which had been hovering around the $400 level. A quick inspection of the option chain showed an IV skew. The short option as seen below had IV at the time of 47.14% compared with the long option, which had IV of 43.09%. For this calendar, we will be selling more expensive premium than we are buying, which is a good thing. Buy low and sell high!

At the time the stock was trading around $402.50. We modeled out selling the 400 put for the coming Friday’s expiration and buying the 400 put for the following week’s expiration. The cost of the trade as seen above was 4.45 (11.05 – 6.60) and represented the maximum risk on the trade. Break-evens and max profits are guesstimates done by way of modeling out a P&L diagram, but max profit is earned if the stock closed at $400 at the short option’s expiration.

The main potential source of profit from time spreads like calendars is positive theta. In the example above, the current positive theta at the time was 0.61 (1.19 – 0.58). Based on the current theta, every day that passed would increase the premium by 0.61 ($61). If NFLX continued to trade close to the $400 level, that positive theta would grow as the week moved closer to the short expiration.

Generally, I like to manage calendars two ways: off the chart and risking 25%. So, in this case, if the premium would have dropped about 1.10 (rounded down) from the original cost of 4.45, we should have considered exiting some of the position. In addition, the stock had nice potential resistance on an hourly chart as seen below from the 50-period moving average. It threatened to move through that level but never succeeded and the $400 level of potential support held too. 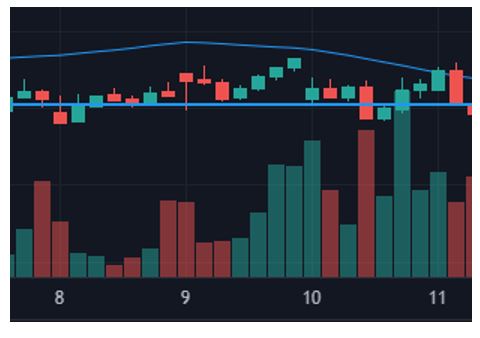 As I mentioned, patience will often pay off for a trader. Friday morning, the stock was hanging around the $405 level. The $400 level would have been better but notice the option chain below. The 400 short put that was expiring that day still had plenty of premium that needed to decay if the stock continued to trade over the $400 level. With a current negative delta of 0.05 (0.48 – 0.43), a move higher would have cut into additional gains, so the position needed to be monitored.

At the time of the screenshot, the position could have been sold for 6.51 (9.25 – 2.74). That means the profit at the time was 2.06 (6.51 – 4.45) or over 45% of the original risk on the trade. Patience through the week and support and resistance doing their part to keep the stock close to the $400 level resulted in a nice gain due primarily to positive theta. I love time spreads!