There are numerous books and journals written on charting techniques and seemingly countless patterns. There is terminology that describes popular patterns using bar or candlestick charts. Some of the most well-known charting patterns include flags and pennants, trendlines, head and shoulders, gaps, island reversals, and ascending/descending triangles. Some of the basic patterns for candlesticks are known as hammer, doji, hanging man, shooting star and spinning top. Technical analysts tag patterns with names to identify opportunities. Ideally, if one recognizes a particular pattern, it may telegraph which direction a trend will take.

Use Candlesticks to Identify Momentum

Each tool or technique is valuable in its own way. So, I decided to research a few charting patterns in different time frames. I figure a pattern should repeat no matter if the time frame is a day, week or even an intraday view. I began testing with daily candlesticks. Candlesticks illustrate momentum better than bars. Each candle reveals a bullish, bearish or neutral bias.

Markets do a few things: They trend up and down, and they consolidate. They do this in varying time frames. For example, you may see a trend day up during weekly downtrend. Or a market may enter a period of consolidation in the middle of a long-term trend. Breakouts often occur after consolidation phases and consolidation periods often follow trends, especially when the speed of the move reaches overbought/oversold status. For this exercise I will concentrate on a few common and effective candle patterns, not speed.

Possibly the best performing short-term pattern requires just 2 candles and is called “engulfing” (see chart). Using a day outlook, when candle 1 body (yesterday) is completely engulfed by the body of candle 2 (today) and if candle 2 is shaded green, then odds favor higher prices the next day or later. If candle 2 is red, lower prices are apt to follow over the next 24 hours or more. The QQQ daily chart illustrates 2 bullish and 1 bearish engulfing patterns. These are better than average directional signals. This is the edge traders seek.

The graph also shows a “morning star,” which is akin to maybe the most famous candle called a “doji star.” These candles are common before reversals and are an indication of neutrality and exhaustion. Typically, they have a long wick on both sides of a small or no candle body (same open and close). These candles have little to no overlap of the previous and ensuing candle. The chart shows a morning star was the low prior to a sharp rally.

Engulfing patterns reveal direction, and morning stars and dojis warn us of impending change and neutrality. Traders need to know when to hang with a trade or ring one up. Therefore, a long-term view is dependent on near-term directional analysis. A candlestick works well as a short-term directional indicator. A series of candles can help us time the start or end of a trend. 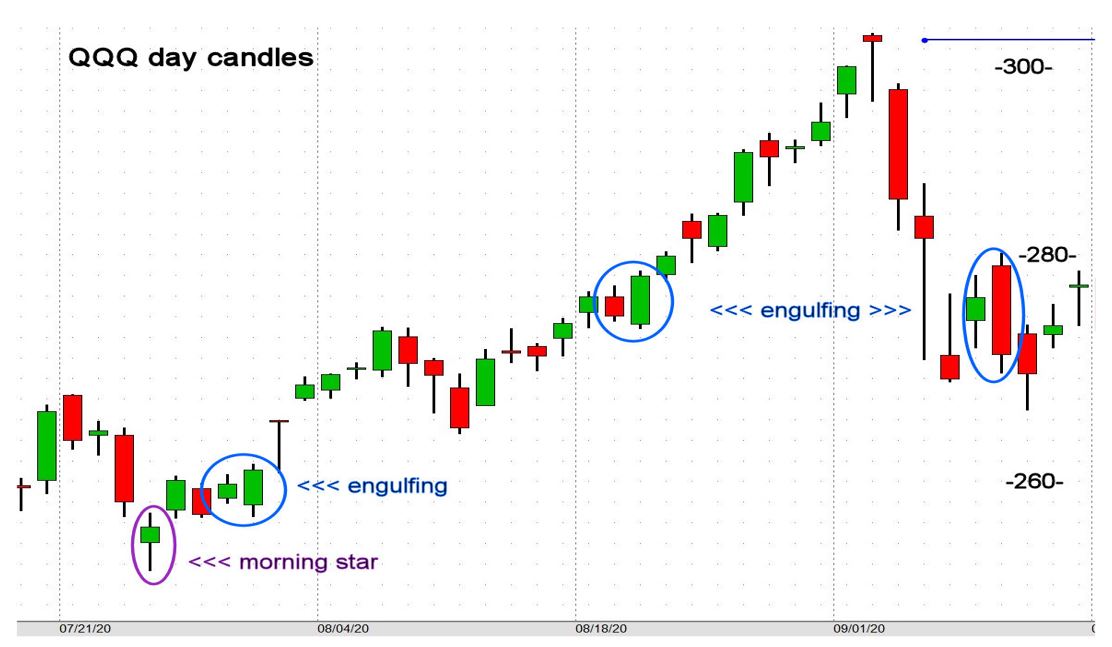 Where to Find and How to Use Market Depth

Life in the Fast Lane