How to Identify Market Trends and Catch Them Early

To recognize market trends early is every trader’s ambition. The earlier you catch a trend, the more profit potential grows and risk decays. Timing this phenomenon requires a breakout strategy. Entry at the beginning of a sharp vertical move (trend) is the goal.

Timing is the ideal entry price and moment to enter a position. A breakout or above average vertical move is probable is the definition of timing one. Markets trend and consolidate; that is what they do. Consistent pre-trend indicators require at least two components. First, define a consolidation phase because they frequently precede breakouts. Range and time dimensions are integral when calculating trend potential. After an acute vertical move a consolidation phase often follows, leading to another trend phase and the process repeats. Common factors in a pre-trend pattern include:

To enhance timing a trend or directional trade, we need to establish standards first. These gauges will be used to judge when odds have shifted to favor an above average vertical move or conversely a period of choppy trendless trade. A choppy trendless phase is a premium seller’s dream. This type of pattern is common after a market reaches overbought/oversold status. When a market moves 175% of an average day range in less than 24 hours, it is thought to be overbought/oversold. Another measure to determine if the speed of a move is too fast is when a directional move spans the length of an average week over 48 hours. To monitor speed, refer to Average True Range (ATR) to set the standard. I prefer a 14-day average and a nine-week average as benchmarks.

Two of the most common pre-trend setups are known as a pennant (triangle) and flag (rectangle) formation. Volume and range length tend to dip below average while these patterns take shape. In the graph below the pennant shape shows a series of days with below average ranges, small candle bodies and severe price overlap prior to the breakout higher. Following the trend higher USO reached overbought status and entered a holding pattern. Short premium (theta) trades tend to do well while an overbought/oversold situation dissipates. 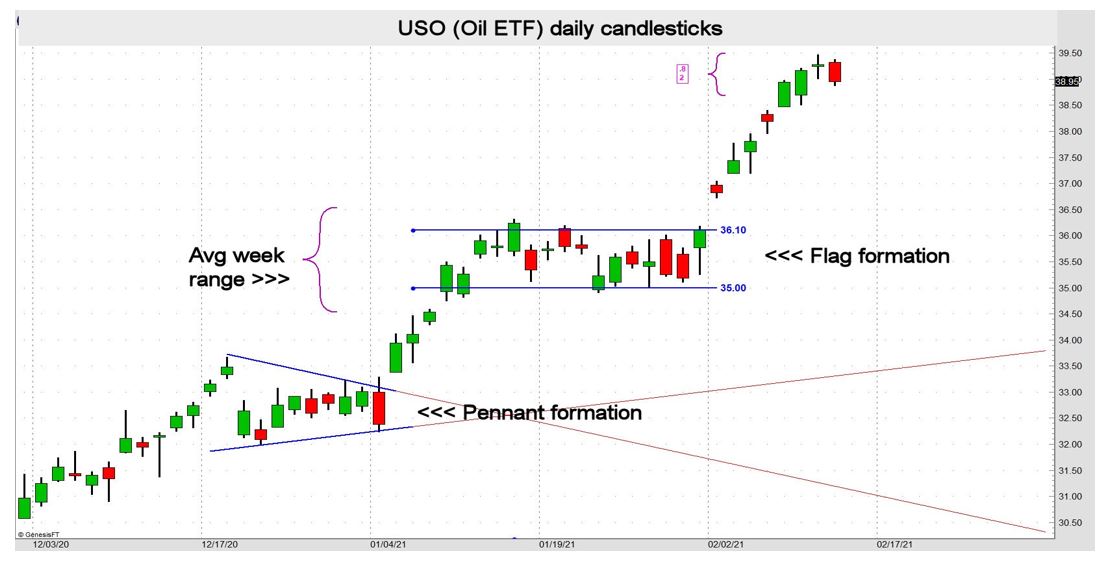 The flag pattern lasted a little more than a couple of weeks. The range over that time was roughly 50% of an average week. The more time spent in a consolidation phase, the more spring-loaded the market gets. Therefore, when it breaks free, the move is often fast and furious.

At the onset of a trend volume tends to rise rapidly as price moves quickly higher or lower. When a market reaches the upper or lower band of a flag or the peak of a pennant, pay special attention to intraday charts. I prefer 60-minute candles. A trend higher often begins when upper band is violated with consecutive bullish (green) candles and volume begins to rise. Many trends lower begin with penetrating the lower band with two red candles and increased volume. Use the same early indicators for the pennant pattern.

To catch a trend early a trader should hunt for the patterns that are most common before sharp vertical moves.