A Credit Spread on CRM

When looking at a chart, I often tell my group coaching students to ask themselves what has a better chance of happening. What I mean by this is that if there is any potential support or resistance, a trader can use it as a proxy for what is more likely to happen. In short, support and resistance have a better chance to keep the underlying from moving through that level. Let’s look at a recent trade idea on Salesforce Inc. (CRM) that we considered in class.

Using the daily chart of CRM below, we saw that the stock gapped higher at the open and continued to move higher for a time. We spotted the 50-day moving average and horizontal potential resistance around the $160 level. That means we noted two potential resistance levels that should keep the stock from moving through the level based on percentages.

We looked at a high probability trade idea, which in this case was a bear call spread. With the stock trading around $154.45, we modeled out the Oct-21 (less than 4 days until expiration) 160/162.5 vertical call spread for a credit of 0.45 (using the mid-price) as seen below. The 0.45 ($45 in real terms) would have been realized if the calls expired worthless at expiration. The total risk on the trade idea was 2.05 (2.50 – 0.45) or $205 in real terms. The position had a negative delta of 0.08 and a positive theta of 0.09 at the time. A move lower in CRM would result in the call premium decreasing, and time passing with positive theta on the position was beneficial as well. 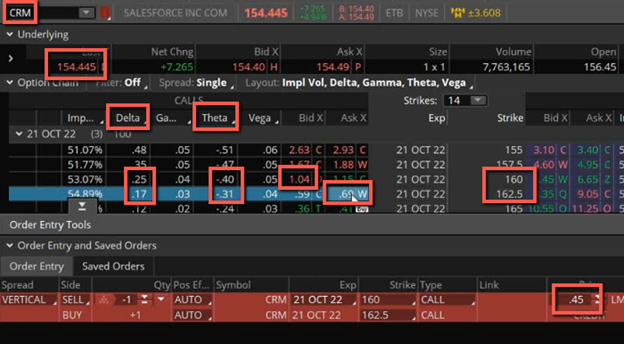 As the day progressed, CRM drifted a little lower (about $153.32 at the time). The call premium shrank and time passing reduced the mid-price to 0.30 as seen below. Based on the mid-prices, the position decreased in value by 33% ((0.45 – 0.30)/0.45). Not too bad for less than a day passing. Of course, returns of that nature cannot always be expected, but they often do happen. 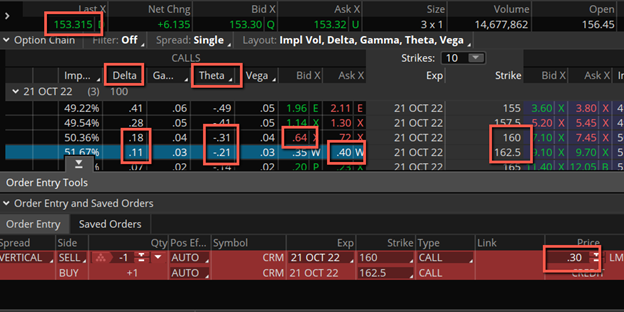 Looking back at this trade idea, the odds were on the side of profit with three out of four ways to profit. The stock could have moved a little higher as long as it stayed below the breakeven level by expiration, it could have traded sideways, or it could have moved lower at expiration. However, those great odds came with more risk as noted above. What also helped this position sooner than later was the negative delta decreasing the call premium when the stock moved lower in the day. What has a better chance of happening? You need to be able to answer that question to give yourself even better odds as an option trader.